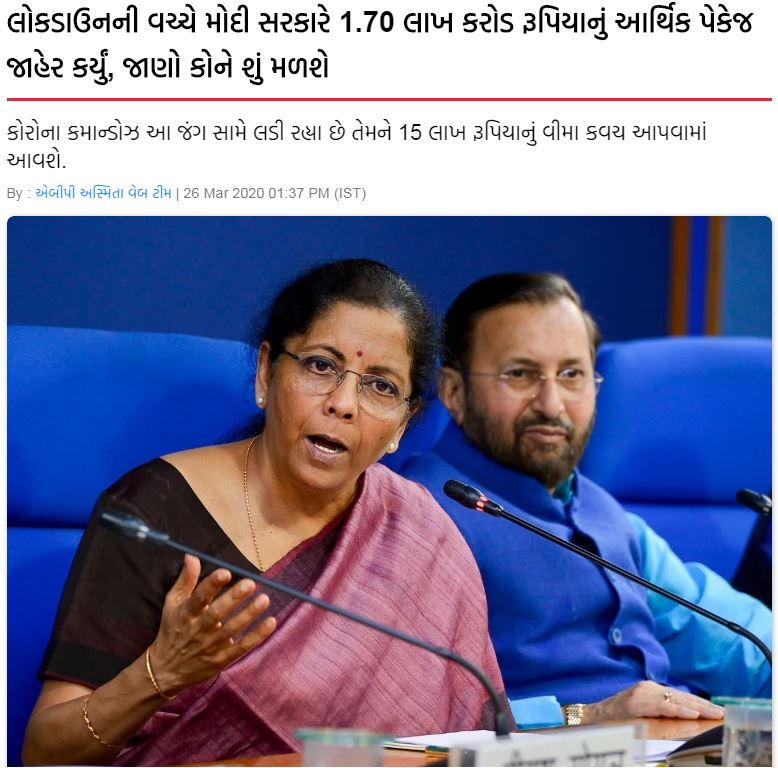 If you do not do this, the person took this medicine and died without asking a doctor to avoid coronas.

Wow! In the case of lockdown, the system in Sabarkantha district worked so that it should be done all over the state.

Advertising on the celebrated plan

Under the celebrated scheme, 8 million BPL families have been announced to provide free gas cylinders for three months.

In the accounts of 20 crore women, housing will be deposited at Rs 500 per month for three months.

Relief for the elderly and the disabled too

1000 rupees will be provided for the elderly, widows and the disabled. This will be for the next three months. Which will be deposited in two installments. Direct benefit transfer will be made for the people in this category. About 300 million people will benefit from this initiative.

Sitharaman said the wages of laborers under MGNREGA have been increased. The wages were previously Rs 182 which is now Rs 202. 5 crore families are expected to benefit.

An even bigger ad for 8 crore farmers

An announcement was also made for farmers under the Prime Minister's Kisan Samman Nidhi scheme. It has been decided to deposit Rs 2000 in installments in their account in April. This advertisement will benefit 8 crore farmers. Money will be transferred directly to the farmers account through Jan-Dhan account.

In addition, the Prime Minister's Poor Welfare Food Scheme will provide food to 80 million poor people. There will be no poor appetite so each person will be given 5 kg of wheat or rice for the next three months. Apart from that, they will also get the same amount of five kilos previously received. 1 kg of pulses of choice will be provided per family for the next three months.

Then the poor are the poor people who need it

Talked about how the poor get a night out

The country is fighting the Corona virus. The lockdown and the Corona virus have caused an economic blow to the country and the world. At that time, Nirmala Sitharaman can announce the importance of the economy as well as employment. It is said that the Modi government may have planned an economic relief package at yesterday's cabinet meeting to get out of the Corona crisis.

It is important that after yesterday's cabinet meeting, the government announced to give cheap food to the people. He also appealed to anyone not to worry about buying goods. Prakash Javadekar said that the government has already made arrangements for food and living necessities in every state by taking adequate measures.