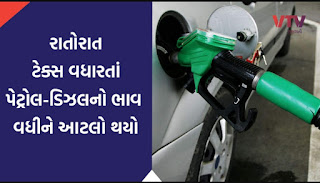 Increase in excise duty by Rs 3 per liter

The government on Saturday announced a hike in excise duty on petrol and diesel by Rs 2 and Rs 1 per liter on road and infra cess. The government has issued this notification. After this, the price of petrol diesel has increased by Rs 3 per liter across the country.
Why this decision was made

Due to this decision, the weakness in the economy as well as the government facing the recession will make it difficult to get more money. The government has taken this decision due to the fall in oil prices in the international market. However, this increase in companies that are generally reducing the prices of crude will put a huge burden on consumers.

Central and state governments can make more money by imposing tax on petrol
Almost half of the money in liter petrol goes into the pockets of governments like taxes. Of this, the excise duty of Rs. Since 19.98, the revenue on diesel is Rs 15.83 per liter. This is followed by VAT which varies from 6% to 39% in different states.

State governments also increase their income by increasing VAT on petrol and diesel. In the year 2014-15, where VAT received Rs 1.3 lakh crore, it has increased to 1.8 lakh crore in 2017-18. Last week, the Karnataka government announced raising petrolpar tax from 32% to 35% and diesel from 21% to 24%.