Reliance Jio new tariff plans unveiled: Here is how much you will have to pay from 6 Dec

Join WhatsApp Group
Reliance Jio New Plan Rate Efective from 6th December 2019
Reliance Jio has confirmed that the all new all-in-one mobile tariff plans will be effective from December 6, with unlimited voice calls and bundled data. Reliance Jio says these plans will have a fair usage policy (FUP) for calls made by a user to friends and family who may be using the mobile services of another network. This will be in line with the Interconnect Usage Charge (IUC) rules that govern the telecom tariffs at the moment. 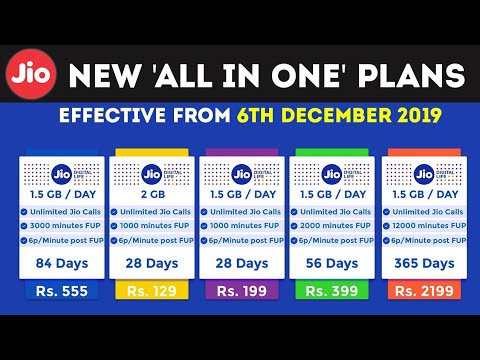 “Although, the new All-in-One plans will be priced up to 40% higher, staying true to its promise of being customer first, Jio customers will get up to 300% more benefits,” says the company in an official statement. Jio says they will take measures including appropriate increase in tariffs in a manner that does not adversely impact data consumption or the growth of digital adaption and services in India.

Reliance Jio says that the new AIO plans will be available across multiple price points and include more benefits for users to take advantage of.

Reliance Jio Infocomm Ltd on Wednesday revealed the new tariffs of its ‘All in One’ plans with unlimited voice and data services. The new tariffs range from ₹199 a month to ₹2,199 for one year. The customers will get 28 days validity, on a top up of ₹199, 56 days for ₹399, 84 days for ₹555 and 365 days for ₹2,199 recharge. The customers will now get 1.5 GB data per day instead of 2 GB earlier and unlimited Jio to Jio calling. The new rates will come into effect from 6 December.

While the tariffs have been hiked by up to 40%, customers will now get 300% more benefits, the company said in the statement.

Jio has also asked users to take full benefits of its old recharge plans by going for advance recharge plans before tariffs are increased. Before 6 December, to get 336 days of uninterrupted services, you can recharge four times with ₹444 plan which offers you 2GB data per day. Each such ₹444 recharge is valid for 84 days and buying four such plans will ensure that you get 336 days of service.

On 1 December, along with other telecom operators, Jio had announced that it will launch new all-in-one plans with unlimited voice and data.

Airtel has merged its popular ₹169 and ₹199 plans into a single ₹248 pack. Their previous 28-day validity remains the same. The tariff hike for users of its ₹169 pack comes to be 47%, highest among its peers, although customers will now get 1.5GB of data per day, 50% more from what they were getting earlier and the same as what the ₹199 plan user was enjoying. Vodafone Idea’s latest prepaid tariffs come with validity periods of 2 days, 28 days, 84 days and 365 days. 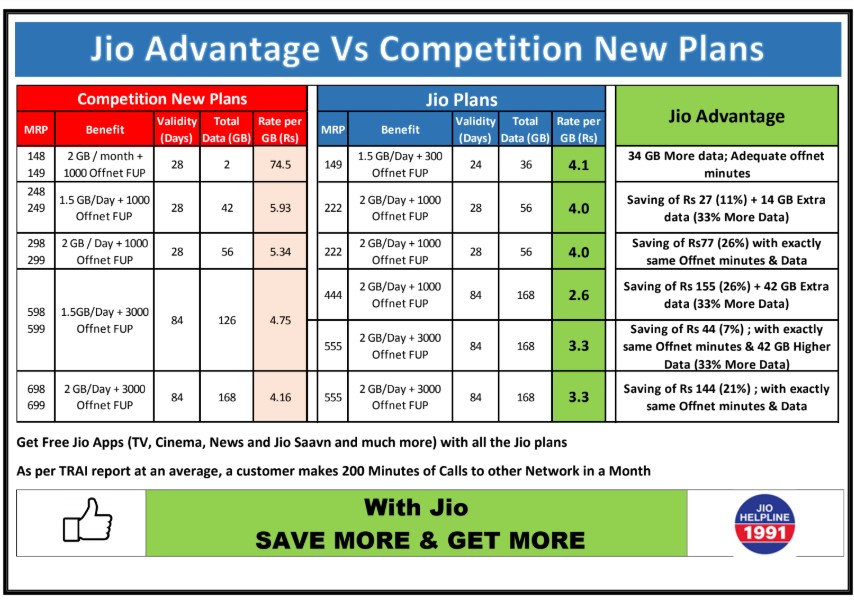 It was in October that Reliance Jio had announced new All-In-One plans for mobile users, which bundled on-net calls, off-net calls and data as well as various validity options. Those AIO plans start at Rs 222 per month and this includes 2GB of daily 4G data, unlimited calls to other Jio numbers across India, as well as 1000 minutes of voice calls to other mobile networks and unlimited SMSes. The way this works is that for every Rs 111 you pay more over this base plan, you upgrade to one extra month of service. This meant the Jio All-In-One plan costs Rs 333 for 2 months and Rs 444 for three months—with the Jio user paying Rs 222 for the first month and Rs 111 for the subsequent months.

0 C "Reliance Jio new tariff plans unveiled: Here is how much you will have to pay from 6 Dec"