Polling across 288 assembly seats in Maharashtra took place in a single phase election, where approximately 55% of voters turned up to cast their vote till 6pm, according to data provided by ECI’s Voter Turnout app. 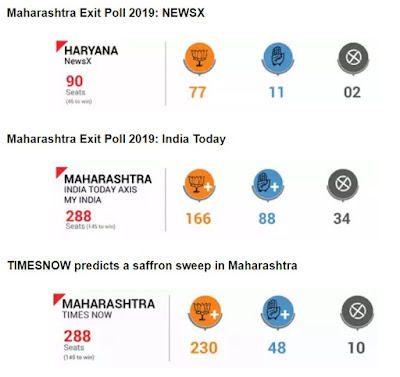 Exit polls are predictions based on responses of the people who have cast their votes. Assuming that the voters have correctly revealed their choice, pollsters predict the results much before the actual counting of votes.

While addressing an election campaign in the state, Prime Minister Narendra Modi had said “Narendra in Delhi and Devendra in Maharashtra is a superhit formula” 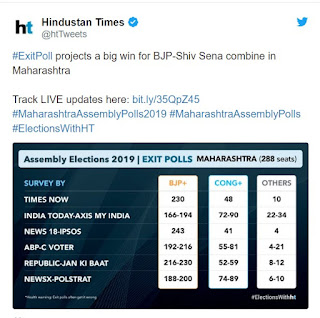 With voting for the single-phase assembly elections in Haryana and Maharashtra ending on Monday, a series of exit polls have predicted a sweeping majority for the ruling BJP in both the states.

Four separate exit polls estimated that the BJP-Shiv Sena alliance would return to power in the 288-member Maharashtra assembly, with two of them giving more than 200 seats to the ruling combine. On the other hand, pollsters have predicted an emphatic victory for the incumbent BJP government in Haryana, with three exit polls predicting that the saffron party will win over 70 seats. 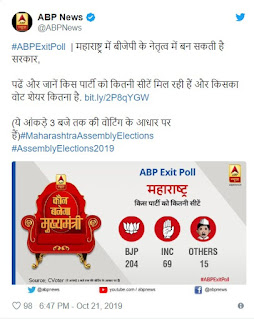 The run-up to the vote witnessed a campaign which was dominated by the BJP’s aggressive narrative on the nullification of Article 370 and marked by the Opposition’s lacklustre canvassing. The results for Maharashtra’s 288 seats and Haryana’s 90 seats will be announced on October 24.

Maharashtra, Haryana Exit Poll Results 2019 LATEST Updates:
The India Toda- Axis My Poll is predicting the closest contest in Maharashtra. According to the prediction, BJP-Shiv sena will win 166-184 seats. Congress-NCP are predicted to win 72-90 seats while other parties like VBA and AIMIM are expected to win 22-34 seats.

With polling concluding in all seats of Haryana and Maharashtra assemblies, results of various exit polls have started trickling in and most pollsters have predicted that the saffron party's winning run will continue in Maharashtra and Haryana. An average of most exit polls shows that the BJP and Shiv Sena combine will win 213 seats in the 288-seat Maharashtra Assembly, while the Congress and NCP combine will take 61. Other smaller outfits and independents are projected to win 61 seats.

News18-IPSOS predicts dull show by the maha-agadhi alliance, led by the Congress and the Sharad Pawar's NCP. According to the survey, the NCP-Congress alliance is likely to bag merely 41 seats, with the Congress winning 17 and NCP taking away 22 seats. Two seats have been bagged by other alliance partners, according to the IPSOS survey.